We’re so excited to announce that we have been shortlisted for an award at the UK Agency Awards 2019. The Your Sexual Health Matters Campaign, which made national headlines and onto TV screens across the country earlier this year, has now earned us a finalist slot in the Best Not-for-Profit Category at the prestigious national awards.

The objective of the campaign commissioned by Derbyshire Community Health Services NHS Trust in 2018 was to raise awareness of sexual health services in the county. Using our behavioural change know-how and expertise, we conducted in-depth research and used our findings to create a county-wide campaign to encourage residents to practice safe sex and get tested at one of 11 clinics.

The campaign ran from January to April 2019 and targeted young adults lacking confidence, vulnerable adults, residents aged over 35, and people who fail to turn up for NHS appointments – costing the NHS money. The cheekily named ‘Jiggle, Wiggle’ campaign, aimed at residents over 35, went viral and featured on Lorraine, Loose Women and Have I Got News for You.

It also hit headlines around the country and became a national debate over a number of days, featuring on the Mail Online, in the Daily Telegraph and the Guardian, as well as sparking debates on TV talk shows and on Radio Four.

Praise has also been given for how the campaign was able to reach vulnerable adults including sex workers and the homeless, via homeless charities, drug and alcohol outreach centres, and foodbanks.

The campaign led to a 63.7% increase in orders of online testing kits in the first month alone, with an estimated 1 million people across the UK reached by the campaign in under 3 months.

Kelly Hunstone, Chief Executive of Social Change UK, says: “I am immensely proud of our award-winning team. Clients choose us for our unique approach that combines social research, behavioural science and creativity, and for our ability to deliver campaigns that not only capture the public’s imagination but lead to positive social change.”

Founded by Kelly in 2010, we have now been nominated for 12 awards for our work on tough issues, such as mental health, child sexual exploitation and smoking in pregnancy.

The winners of this year’s UK Agency Awards will be revealed on 19th September at the Montcalm Marble Arch in London.

You can read more about the Sexual Health Matters campaign here… 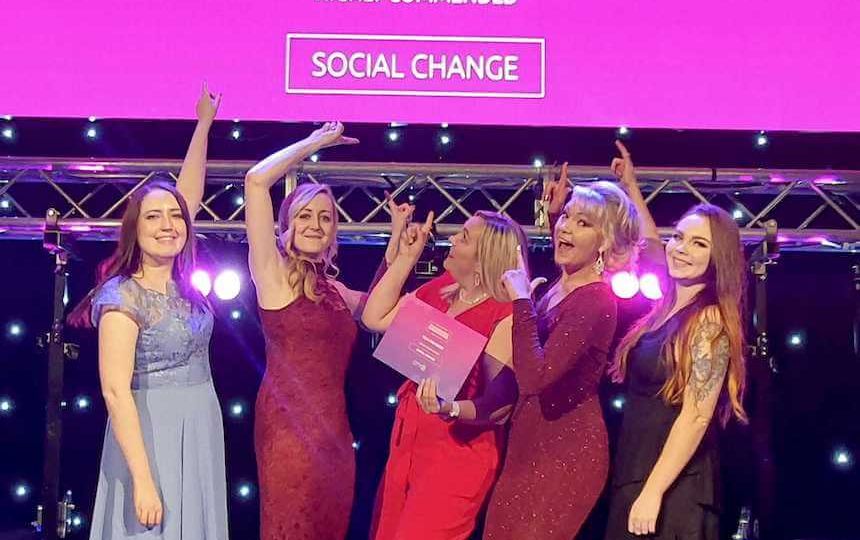